The ear is an organ able to receive sound. Sound we hear usually travels to the ear as vibrations of air molecules.

The ear is capable of detecting faint sounds and analyzing them, the direction they are coming from, the distance to source of the sound, and the type of sound. 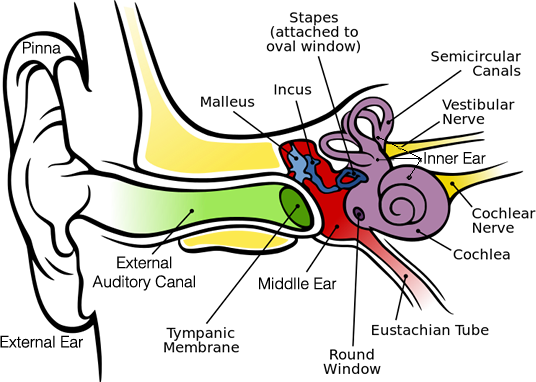 This is done in the inner ear (cochlea) where the sound is changed to an electrochemical form that codes information about the intensity, frequency, and complexity of sound.

Another function of the ear is to keep the body balanced (in equilibrium). Equilibrium is more vision than hearing, but the sense organs for balance are found in the ear.

The middle ear is a narrow air filled chamber separated from the outside by the eardrum (tympanic membrane) connected to a small chain of three bones called auditory ossicles. The three bones are the hammer (malleus), the anvil (incus) and the stirup (stapes).

The inner ear is a complicated system of fluid filled passages and cavities deep in the temporal bone. It contains the sense organs for hearing, equilibrium, and the sensory nerve endings of the eighth cranial nerve.

The pinna has no bones in it. A substance called cartilage is what makes it hard. The ear lobe is the only part of the pinna that has no cartilage.

The pinna has several small muscles connecting it to the skull and scalp. These usually do not function but some people are able to use them to wiggle their ears.

The main function of the eustachian tube is to keep the air pressure the same on both sides of the ear drum (tympanic membrane). The tube is closed during rest and opened during swallowing, so minor pressure differences are adjusted unconsciously. During a rapid dive in an airplane the tube may remain tightly closed. The pressure can be releaved by closing the mouth and nose and breathing out. This is called the Valsalva maneuver named after its discoverer Antonio Valsalva.

When a doctor looks in your eat with an otoscope she is looking at the color of the ear drum (tympanic membrane). The healthy membrane is pearl gray and sometimes has a pinkish or yellowish tinge. The doctor can also see through the membrane and the malleus is normally seen dividing the membrane into two equal halves. Sometimes the incus can be seen.

The cochlea is named after the Greek word for snail.